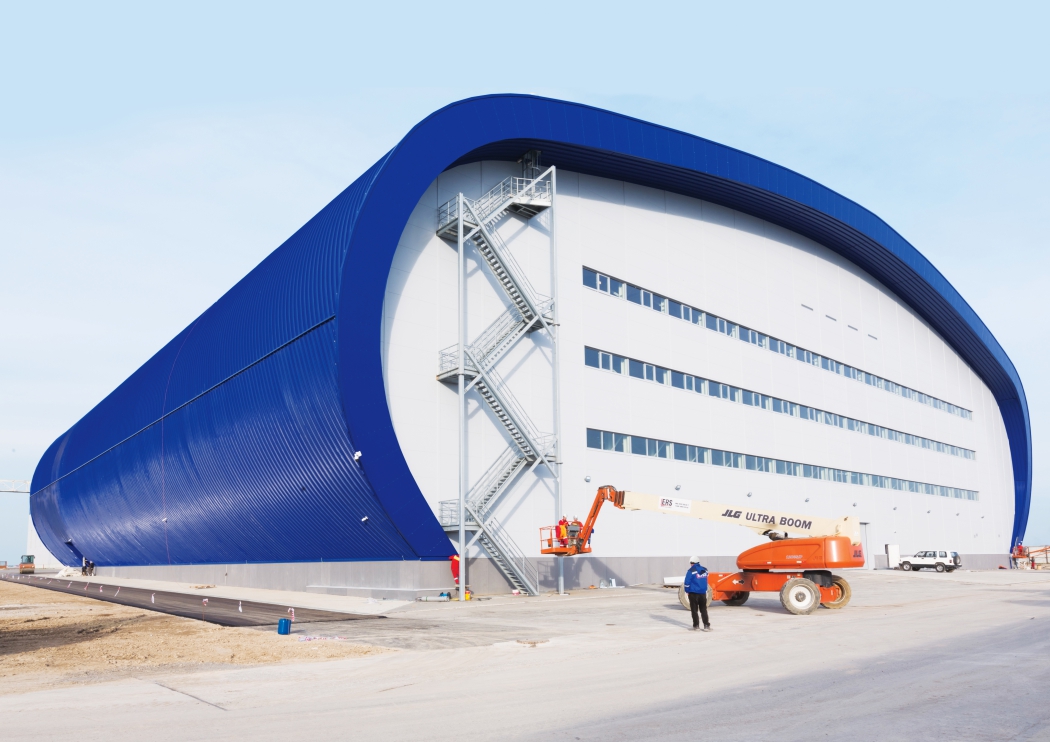 This was a complex steel structure project, as the design had to account for seismic activity, high wind load (41 m/s) and specific fire safety requirements. The hangar area is 8 046 m2 and its height reaches 31 metres, which is equivalent to an 11-storey building. The total amount of metal used in the construction of the object is about 1,850 tonnes, and the roof boarding covers nearly 14,500 m2.

Each truss was designed and made from seven separate segments at such a size that they could be transported from the production unit to the construction site. In order to ensure the compliance and quality of the segment connection units, as well as to speed up the assembly carried out at a great height, all the truss segments were mounted on temporary towers before fixing them together, and the connections were made with screw joints. The engineers designed the hangar with meticulous precision, and the technology chosen for the truss assembly has fully justified itself. Baku hangar’s design team consisted of five engineers and three technicians. Six members of the UPB Nams project management team worked together in one shift; however, the largest number of employees working simultaneously at the site was 110.

The construction of the roof boarding was no less specific, requiring about 60 000 fixings with a positioning tolerance of 2 mm. The shape of the roof plane posed a particularly great challenge for the project management team.

In accordance with the specific fire safety requirements, a foam fire suppression system was installed in the hangar for extinguishing a possible fuel fire. The NFPA409 Standard on Aircraft Hangars states that the foam system must be able to fill the room at a height of at least 10.8 metres within 12 minutes. In order to confirm that the built-in system complies with the standard requirements, the foam system was tested by filling the hangar with foam at a height of more than 2 m within the timeframe specified in the standard. It should be noted that the regulations do not require the foam system to be tested before commissioning, so few companies perform such a compliance test of the built-in system.

Thanks to everyone involved in the project!